This autograph has been examined by the Rackrs.com Team, and it is our opinion that this autograph is authentic.

PROFILE OF FELTON SPENCER
Spencer was selected with the 6th pick in the 1990 NBA Draft by the Minnesota Timberwolves. Spencer, at 7'0", entered a tough situation as starting center, averaging 7.1 points and 7.9 rebounds and shooting 51.2% from the floor, good enough for a spot on the NBA All-Rookie Second Team. Luc Longley, whom the Wolves selected immediately after drafting Spencer, gained more minutes and Spencer's production decreased. After the 1992-93 season, Minnesota traded Spencer to the Utah Jazz for power forward/center Mike Brown. In Utah, Spencer became the successor to Mark Eaton, and he provided the Jazz with solid scoring, rebounding and defense at the pivot position. In 1993-94, as a complement to John Stockton and Karl Malone, he averaged 8.6 points and 8.3 rebounds while shooting 50.5% from the floor. Spencer and the Jazz were on their way to greatness in 1994-95, but 34 games into the season he ruptured his left Achilles tendon and was lost for the year. Utah went on to win 60 regular-season games but failed to reach the NBA Finals by losing in the first round. He missed the first 11 games of the 1995-96 season while recovering from his Achilles injury, but went on to play in the remaining 71, starting 70 and averaging 5.6 points and 4.3 rebounds in 17.8 minutes per game. He shot a career-high 52.0% from the field, tying Adam Keefe for the second-best mark on the team. On August 10, 1996, Spencer was obtained by the Orlando Magic for guard Brooks Thompson, forward Kenny Gattison and a first-round draft pick, after the Magic had lost Shaquille O'Neal to the Lakers as a free agent. But he played just one game for Orlando before he was traded to Golden State in the deal that brought Rony Seikaly to the Magic. He went on to play 71 games for the Warriors and do a solid job in the middle, ranking second on the team in rebounding and third in blocked shots. His role was diminished in 1997-98 by the arrival of second-year man Erick Dampier as the starter, as well as the drafting of rookie Adonal Foyle, and he saw relatively limited action as a reserve in 68 games. He played even less in 1998-99, averaging just 6.1 minutes in his 26 appearances off the bench.
Spencer retired after the 2001-02 season. 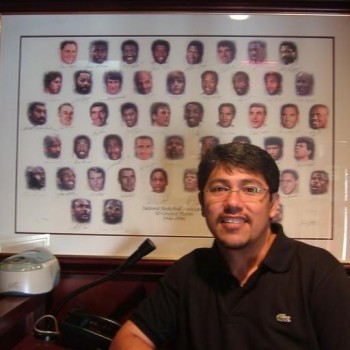 To see the comments on this autograph, you must log in or register.

Similar Autographs Add your autograph to the guide

Episode 1 of What Do You Collect? is now streaming online!
Watch the award-winning show!